I've always been attracted to this style of artwork, the woodcut print. Albrecht Durer was apparently a master of this art and here's an example of his work: 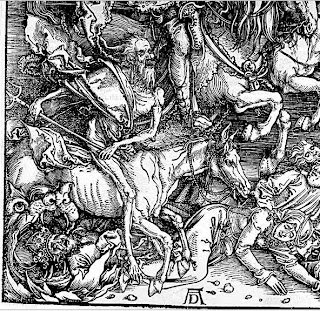 I have no idea why I'm showing that masterpiece and then my own pathetic ink drawings that are trying to mimic the woodcut style, but I'm a strange person. Anyway.....I've been working on a "Halloween Book" and I decided to illustrate it in this style, using old woodcuts as reference.
I've obviously put my own spin on the drawings and have not copied them exactly. It was done more as an exercise to keep my drawing skills up. 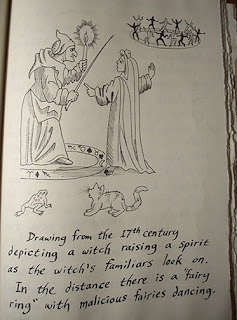 The above image was referenced from the Malleus Maleficarum, one of the most evil books ever written, attempting to justify the European witch hunts and trials. 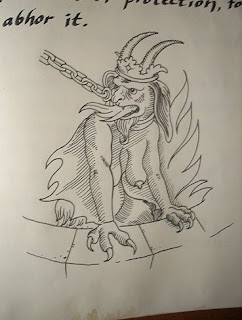 Above was inspired by a woodcut describing the Apocalypse. "The Beast" in chains. 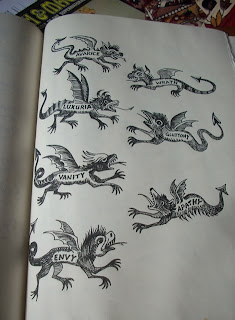 Above, of course are the seven deadly sins, in little demon forms. 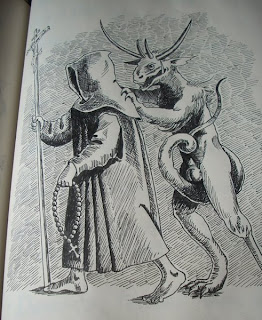 This one was actually the very first one I did. It spurred me on to try more. The next one is of two completely different styles: 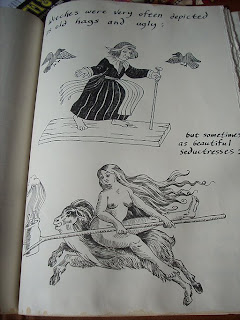 Below is an image I've come across a lot on the internet....Matthew Hopkins...Witch Finder Generall. I've noticed a lot of "creative" spelling going on in some of these old texts.
I recently discovered there's a movie called "The Conquerer Worm" (originally titled Witchfinder General) starring Vincent Price (swoon), as Matthew Hopkins. I'll have to see it! 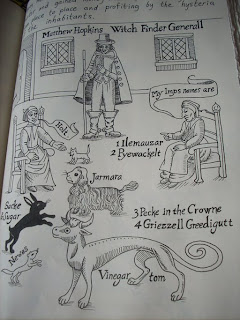 Apparently, Hopkins had a real problem with little old ladies owning small animals.
And speaking of small animals, cats have played a huge role in the whole witchhunting tragedy. 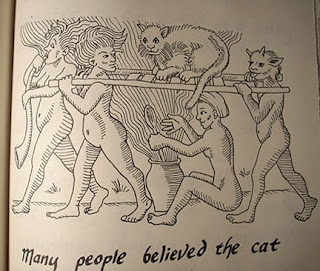 "Many people believed the cat to be a child of the moon because of its association with night and eyes that resembled the phases of the moon." (I'm just finishing the quote that I cut off in the image)

And speaking of mysterious things and children, my daughter wanted me to make her a "voodoo doll" for some strange reason. I warned her not to stick pins in it or let anybody's hair become a part of it. Anyway....after it was made, she stuck a couple of pins in it and said it hurt her and promptly decided she didn't want to have anything to do with it any more. 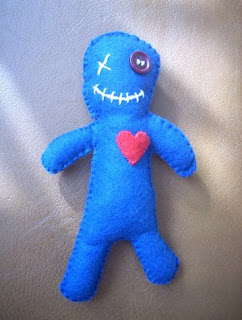 I followed her drawing for it, that's why it's asymmetrical.
Posted by Suzanne Dargie at 9:46 PM 5 comments:

I decided it would be fitting to show off one of the first stuffed toys I ever made. He was made from a kit that we used to order through my Junior High School's 'Home Ec' class. The pattern was printed directly on the back of the fake fur, and the eyes and other parts came in a plastic bag with very simple instructions printed on a sheet of paper. I remember even the stuffing was included. I had also ordered a Baby Skunk and White Kitten....but those are long gone. We're talkin' 1978 here people. Anyway, this Dachshund, who measures about 14 inches from nose to tail is the only one I've been able to hold onto through all my years of moving from place to place. I've always been a huge fan of stuffed animals, owning about 50 of them when I was a girl.

My daughter has beat my record by now. I'm sure she must own over 50 furry friends by now. The latest toy she asked for was one of the "Rayman Raving Rabbids" from a Wii game she and her brother have. I told her that instead of ordering one, I'd just make her one. And so, here it is: 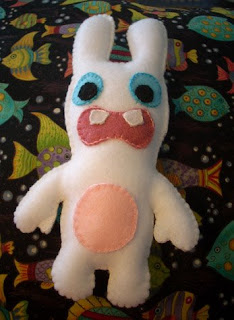 Crazy looking, isn't it? Well, she was thrilled to see him come to life this weekend. As if I didn't already have enough little chores to do. I don't mind making a toy as long as I know it's going to be loved....And I can tell this one is. 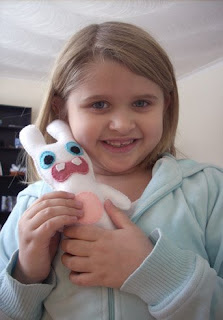 (She's just getting her adult front teeth, that's why they look weird)
Posted by Suzanne Dargie at 8:14 PM 3 comments:

On Christmas Day we went to Rich's brother's house in Flesherton Ontario. On the way there, we always pass this sad yet fascinating old abandoned house which I have been meaning to photograph for a couple of years now. Well, this time I had my camera with me and although I was convinced it would have collapsed by now, I was in luck! I grabbed a few photos from the road .....because there's a large gate blocking the property and there were three foot snow-drifts. But anyway, today I had the chance to "play" with the digital photos a bit. I like how they turned out. (One day I'm going to have to get myself a colour printer.) 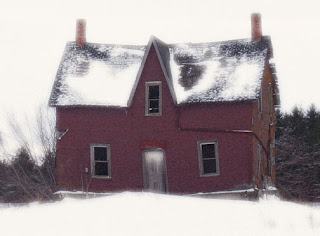 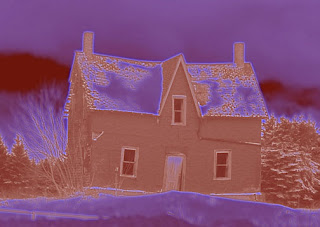 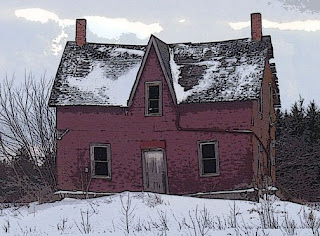 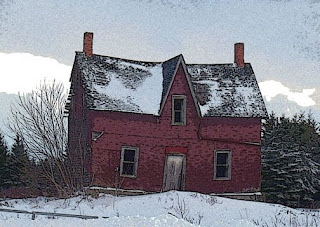 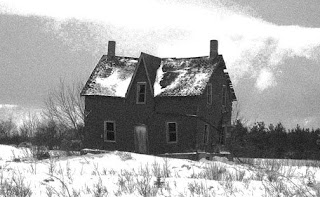 And of course, here's an unaltered photo. 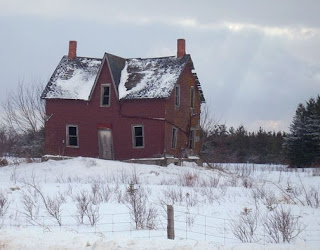