This is a prop from a few years ago, but I was never happy with the way I spaced the numbers. I tore them off and tried to make it into a regular 12 hour clock at one point, but due to the extreme oval shape of the face, it didn't tell acurate time. So yesterday, I said to myself that I would fix it. I dug up the extra pack of numbers I had and restored it to the Hallowe'en prop that it was meant to be. I originally wanted to carve bats and mice, but after finding these little guys at "Dollarama" I just glued them on. The pine panel wasn't cheap. I got that at "Michaels" along with the clock mechanism and numbers. It looks cool when you see that the hands actually work! 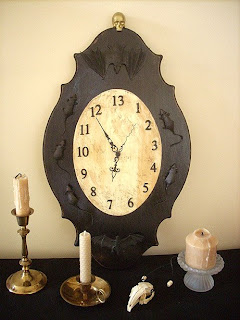 See the rabbit skull at the bottom? I've had it around 20 years and I've made it into a necklace.
Posted by Suzanne Dargie at 1:43 PM 5 comments:

So here are the costumes I made for the kids. My daughter wanted to be a devil......I have no idea why.......but she did. So I based a body-suit on one of her bathing suits out of 4 way stretch velveteen, then made a skirt out of red chiffon and sequinned fabric based on an eight-point-skirt design. Her jacket is a red knitted scarf that I discovered was a tube and if cut in half and made "sleeves". I joined it together at the back, then added red marabou around the "collar" and front edges. 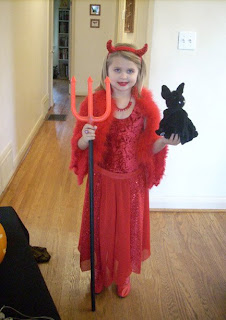 The shoes were a great find......white leather dancing shoes that were in a clearance bin that I painted red with acrylic paint and red glitter! Red opaque tights complete the costume. Of course she felt her Hallowe'en Webkinz Bat had to be included in the photo too. 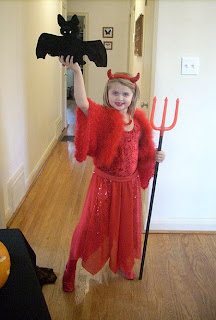 My son's costume wasn't difficult, but I was trying not to spend a lot of money, so we re-used his cape from his old Darth Vader costume, and I bought a clearance priced white dress shirt for him. (He was supposed to wear black pants for our little photo shoot, but he forgot them at his Dad's house.) I fashioned a vest out of an old pyjama top of mine and made the amulet out of a great find from "Arton Beads" and a red ribbon.
The teeth I had to hunt around for, but since I had needed fangs for my Medusa costume, I bought two sets when I was buying mine. 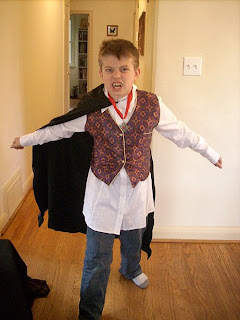 Here's a cool/creepy idea I came up with. I have a deer skull that my sister's twins found out in the woods and gave to me. It must have been a buck, because it was found with the top of its cranium cut off (meaning someone took the antlers). I was never sure what to do with it until now. I put a candle in it, and voila, its a great Hallowe'en prop!
It looks bizarre because the bones from the nasal cavity have dissintegrated. 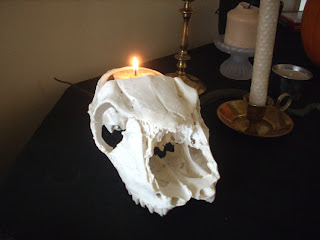 Posted by Suzanne Dargie at 2:50 PM No comments:

Here are the first images of the whole thing together with make-up and jewellery. I decided I should wear fangs because I read that Gorgons were fierce beings, often depicted with fangs. 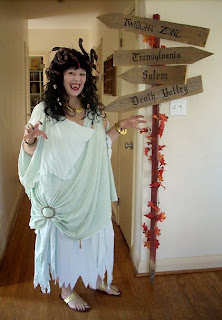 I decided to discard the outer layer of fabric, because it made me look like the Statue of Liberty! 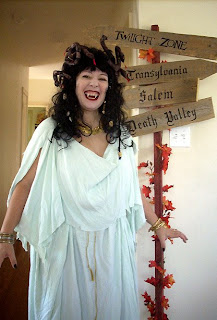 Here's a close-up of the face. I was having trouble with the fangs. The right one just doesn't want to stay put. I may have to use Denture Adhesive. 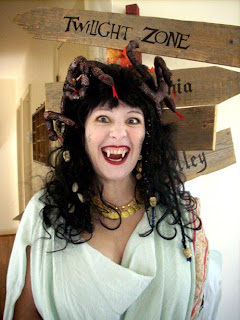 Here's a photo without the fangs. This loses the whole "Medusa" effect. One good idea I borrowed from another costumer online was to draw some scales on my face. That helps with the snake connection. 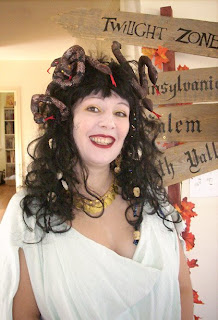 I finally found an old photo of the "cow chair" before I got my hands on it! It was SO UGLY!
Posted by Suzanne Dargie at 9:46 PM 1 comment:

Trying on the Wig 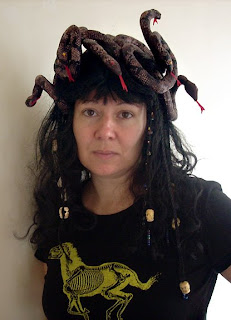 I know I don't look very Medusa-like yet, but with the dress and jewellery...and the make-up...it'll look pretty cool. I've already attached ten stuffed snakes and four rubber snakes, and it still doesn't seem like enough. After looking at this photo for a while I've realized I MUST add more snakes. It shouldn't take too long.
But I still have to make the costumes for my kids!
Posted by Suzanne Dargie at 10:44 PM 4 comments:

A Sneak Preview of my Costume

Here is my Medusa wig being prepared by....who else but me! I've added on 10 stuffed snakes that used to be "bean bags". 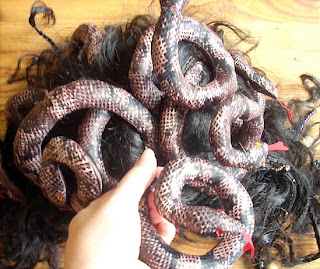 Here's a detail of the wig. I threaded a bunch of skull-shaped bone beads onto some thin braids to help add more interest to it. I also added some iridescent blue glass beads. 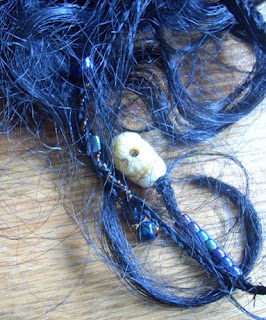 Now I know this has nothing to do with my costume, but I finally got my Dr. Seuss mural done! 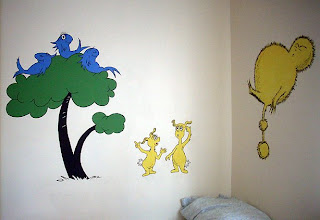 Here are some little guys napping on the closet door-frame: 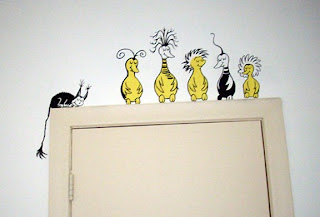